In 2001, University College Dublin’s prestigious Smurfit Business School was informed that one of its Senior Lecturers – “Dr” Gary Santry – had faked his Masters in Business Administration from Notre Dame and his PhD from the Southern Methodist University in Texas and yet had been hired and had taught successfully for over 4 years, even receiving an award from UCD for outstanding service through his contribution to the Business School being ranked the seventh best in Europe by The Financial Times. 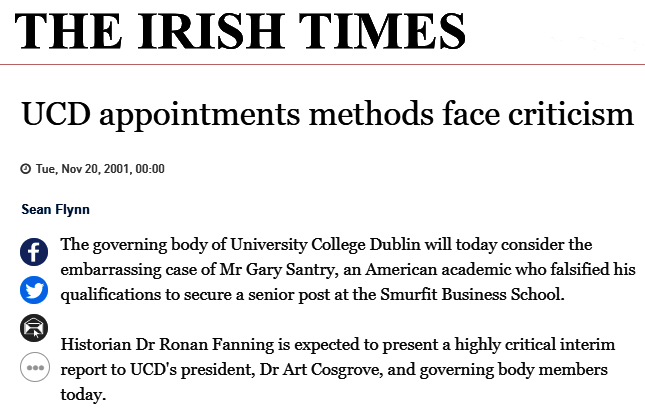 Santry’s unmasking led to stricter controls over university hiring practices and checking of credentials, while Santry himself was allowed to vacate his post and flee Ireland without facing the rigours of the law. The UCD Smurfit Business School Santry affair garnered a lot of news coverage in Ireland and abroad.

In November 2019, the self-styled Director of the Pat Finucane Centre, Paul O’Connor, was unmasked by this blog as an IRA gunman and bomber who had involvement in the murder of another IRA volunteer in Derry – Jim O’Hagan – after which he had gone “on the run” for a number of years.

O’Connor was forced to make admissions in both The Irish News and The Irish Times about his hidden past, but only after the Pat Finucane Centre had made a statement hours earlier decrying the allegations as false and as part of a Brit or Loyalist attempt to discredit the Centre and its work.

Literally within hours of this denial, Paul O’Connor himself admitted to journalists that he had indeed been an IRA volunteer and that photographs of him in a group of armed IRA men in the Bogside were genuine.

Paul O’Connor had for many years led a campaign highlighting Brit and Loyalist human rights’ breaches while he masqueraded as a trustworthy and independent “human rights” activist gaining the ear of prominent politicians wordwide, especially in Irish governments. 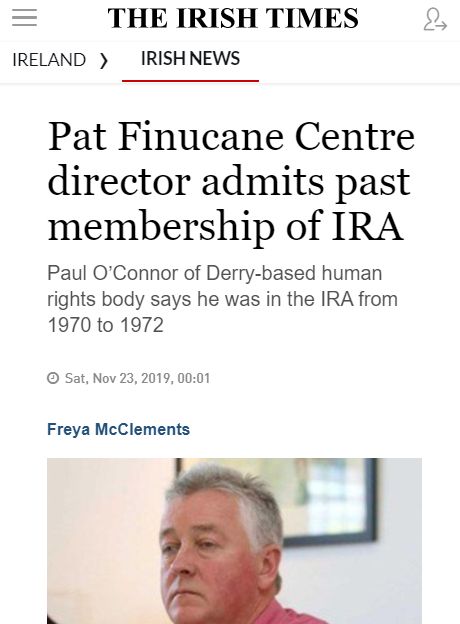 In an article in the IRA’s newspaper in August of 1999, O’Connor declared that he had “discovered” that the then Master of the Rolls in Britain, Lord Woolf, had a British Army past – hardly a secret – and that a British Army past should annul or disqualify any legal judgments made by Lord Woolf. 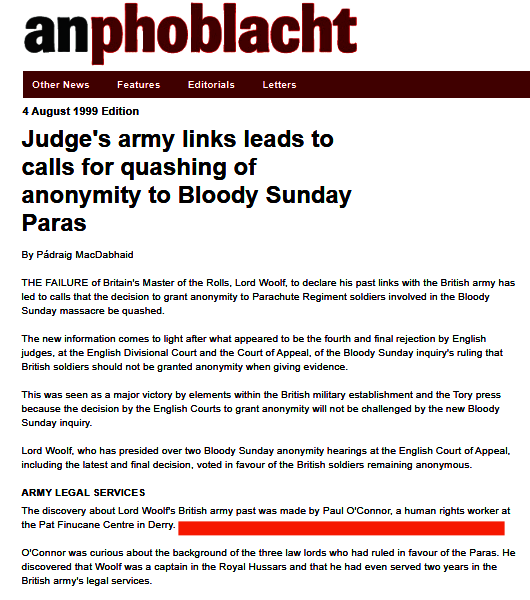 What then of Paul O’Connor’s admissions forced out of him by my blog article and associated photographs showing him armed with a company of IRA men in the Bogside?

Did they not similarly call into serious question his activities in the Pat Finucane Centre so-called Human Rights’ organisation? Should they not also be annulled and disqualified?

Paul O’Connor raised monies for this allegedly bona fide Human Rights’ organisation, from governments and other bodies, while he hid his IRA credentials and was regularly seen and photographed in the company of well-known IRA leaders in Belfast and Derry.

That O’Connor was then interviewed as a credible star witness in “Unquiet Graves” – without any form of warning to viewers about his many years of dishonesty, of double-life, of secret bias and lies – damaged the credibility of not only the documentary, but also of RTE as an independent and publicly-funded entity.

Should the viewers not have been warned of O’Connor’s lies, cover-ups and past?

Should the documentary makers not have warned viewers also of his hidden IRA past, only brought out following his unmasking on this blog?

Unlike in the aftermath of the Gary Santry UCD scandal, there is no attempt at checking the credentials of those on the Nationalist/Republican side in Northern Ireland who claim to be interested in Human Rights and Civil Rights.

Paul O’Connor’s admissions – wrung from him after 40 years of lies by a blog – led to no questioning of the Pat Finucane Centre’s earlier statement denying Paul O’Connor’s IRA membership.

There hasn’t been a single interview of any of the Pat Finucane Centre’s many Board Members about O’Connor’s dishonesty, lies and bias.

The Irish Government said it would continue its funding of the Pat Finucane Centre without regard to its Director’s participation in any IRA Human Rights and Civil Rights atrocities.

For the blog post that unmasked Paul O’Connor, see here.