Witness ‘O’ gave what purported to be ‘evidence’ to the Birmingham Pub Bombings’ Inquest recently.

There were some rather obvious inconsistencies in his strange tale.

Firstly, he said he was on remand in Winson Green prison at the time of the Birmingham Pub Bombings awaiting trial on what must have been prior IRA bombing charges.

He was billed as a convicted IRA bomber – so he was evidently convicted later of those bombing charges as part of an IRA gang that had been arrested prior to the Birmingham Pub Bombings.

(The names of the IRA prisoners who were on remand in Winson Green prior to the Birmingham Pub Bombings’ are easily discovered.)

So, Witness ‘O’ who sought and got anonymity (and the opportunity to give ‘evidence’ by far off video link from Dublin) for what he claimed was ‘evidence’ had previously been named and shamed, arrested and convicted for IRA bombings in either the Birmingham or Manchester areas.

So why would somebody who was previously convicted and named as an IRA bomber now require anonymity for ancient ‘evidence’ that was largely meaningless and only rendered interesting to news media starved of facts by his unsupported claim that the IRA got a written guarantee of immunity from prosecution for self-confessed bomber Mick Hayes (who had already given a television interview in which he admitted his guilt)?

In fact, Witness ‘O’ offered a strange revelation that two days after the Birmingham Pub Bombings – and while he was on remand in Winson Green prison – he somehow or other gave names of two suspected bombers to two unnamed detectives – who never got back to him.

If Witness ‘O’ was announcing that he had informed on two IRA men involved in pub bombings to the Birmingham police – whose involvement he could only guess at since he was isolated in prison for some months himself – he was declaring to the IRA past and present that he was just that – an informer.

He did not name either of the detectives who got the information he guessed at, nor did he explain how he could have come into contact with two detectives from his cell in Winson Green prison.

The only possible way he could have been in contact with detectives while on remand in Winson Green is if his regular ‘remand’ hearing at court occurred – as he claimed – 48 hours after the Birmingham Pub Bombings and when feelings and tempers were understandably running high in Birmingham.

There was no such court remand hearing two days after the Birmingham pub bombings.

Anyone who expressed any knowledge whatever about the bombers at that time would have found himself in deep and physical interrogation about the atrocity for days thereafter and this does not seem to have happened to Witness ‘O’.

Nor did he explain how he could have been in contact with detectives in a setting not witnessed by his IRA colleagues who would have been with him on the journey to and from court for the regular remand hearing.

Nor did he explain how he had managed to meet with two detectives in a setting where, after the meeting, the prison service or police could not have easily blackmailed him for further information for years thereafter by merely threatening to let his IRA prisoner colleagues know that he had secretly met with police detectives and had already and irrevocably ‘informed’ on them…

When asked for any other information, he did not know or could not recall or had never heard of anyone else related to the bombing. 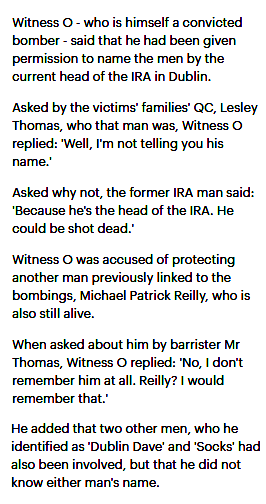 Lastly, Witness ‘O’ referred to the Chief of Staff (CS) of the IRA as ‘the head of the IRA’.

I have never heard a single IRA volunteer refer to the Chief of Staff of the IRA as ‘the head of the IRA’.

That person has ALWAYS been referred to as the ‘Chief of Staff’ or as the ‘CS’.

So, Witness ‘O’ must be one of the following characters who were together on remand in Winson Green at the time of the Birmingham Pub Bombings.

At least one of these men became drug and alcohol addicted during his imprisonment, and I mean seriously addicted to smoking cannabis and drinking huge quantities of ‘hooch’ over the years with serious impairment to mental health.

At least one of these men has been suffering alcohol and drug addiction for decades since his release.

At least one of these men has attempted to be in touch with me in recent years claiming to be on the point of writing a book about the Birmingham Six or related matters – and was so incoherent on the phone that I eventually had to block his calls.

I fear Witness ‘O’ is by now a very damaged fantasist.

Neither has added a single fact to the pile that was not previously published.

Both have shown a total disrespect to the victims’ families.

I fear the Birmingham families have so far been given the IRA runaround.

The full article on Kieran Conway is found here.

A former IRA volunteer who told the truth – here.