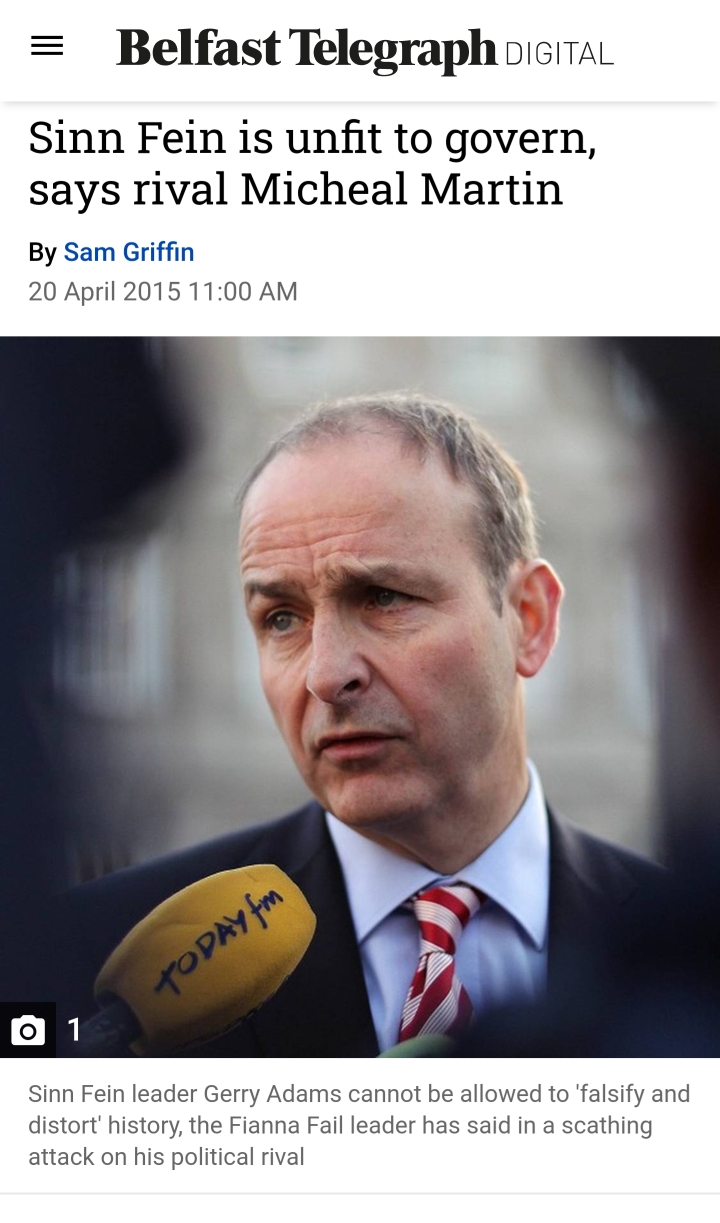 Why should Irish citizens in the Republic of Ireland require shielding from SFIRA while similar citizens in Northern Ireland supposedly should not?

Citizens identifying as British in Northern Ireland didn’t matter in the least.

The claims were hypocritical also because neither Fine Gael nor Fianna Fáil had any difficulty with negotiations occurring with known members of the IRA’s governing Army Council throughout the peace process and even entering into a provisional agreement to release four members of the IRA convicted of the murder of 52-year-old Detective Garda Jerry McCabe during the attempted robbery of a post office van.

Ultimately, the feelings of the families of Garda officers and Irish Army soldiers murdered by the IRA were judged to be completely irrelevant.

Latterly there were more frequent visits by Fine Gael government ministers to Gerry Adams’ Belfast Féile events with the aim to appear ‘greener’ to southern voters and also cheekily dismissive of the political border while the Brexit debate continued.

Fianna Fáil proudly trumpeted its support for negotiations with and on behalf of the IRA during the peace process period, with corrupt former Taoiseach (Prime Minster) Bertie Ahern regularly and garrulously offering since then retrospectives of fulsome praise for IRA Army Council leader and unprosecuted and unconvicted mass murderer Martin McGuinness.

McGuinness’ theatrical state funeral, provided by the recently converted Catholic church in Northern Ireland (Derry Bishop Edward Daly had previously and unhelpfully declared the IRA’s murders “the work of Satan”) was overwhelmed by RoI politicians, not forgetting Catholic church leaders and the very President of the Republic of Ireland himself, labour party veteran Michael D. Higgins.

The fact that Sinn Féin honours all its IRA ‘fighters’ who murdered members of the Irish police and Irish Army is no longer relevant, even while the IRA murderers of 35 years old Irish Army Private Patrick Kelly, father of four young sons, and 23 years old probationary Garda Peter Gary Sheehan are presumably still being hunted.

IRA members murdered these two servants of the Irish state in a gun battle when kidnapped supermarket magnate Don Tidey was freed in a joint police and army operation in December 1983 in woods near Ballinamore, County Leitrim.

Prominent Belfast IRA leader Brendan ‘Bik’ McFarlane was prosecuted for over a decade in relation to the murders until the Irish state’s case against him collapsed.

The IRA’s murders of lesser persons, mere citizens such as Tom Oliver and Paul Quinn – not forgetting the IRA’s many border murders and corpse disappearances – are no barrier to Sinn Féin getting into government.

There is now the very real prospect that a member of the hybrid Sinn Féin/IRA movement will take the Minister for Justice portfolio, someone who may even have been under investigation or surveillance by the Irish authorities for involvement in terrorism.

The Republic of Ireland and Northern Ireland are places where Human Rights and Civil Rights may be declared – by common agreement – to be retrospectively denied to persons murdered by the IRA, whether they were men, women or children and even whether they were murdered years after the signing of The Belfast Agreement.

Murders, murderers and bombings are easily incorporated into the fabric of both states ‘for the common good’.