Shortly after midnight on February 4, 1974, a 50lb IRA bomb exploded in the rear luggage compartment of a private bus ferrying off duty British soldiers and their families from Manchester to Catterick army base.

While the person who informed the IRA of the target must have seen women and children regularly boarding the bus, the bombers went ahead and planted the bomb.

The IRA always took the view that a large number of soldier kills neutralised any concerns about civilian casualties.

The explosion on the M62 motorway shook buildings and was heard miles away.

23 year old Corporal Clifford Haughton, his 23 year old wife Linda and their two children, Lee (5) and Robert (2) were in the back seat of the bus when the bomb exploded. 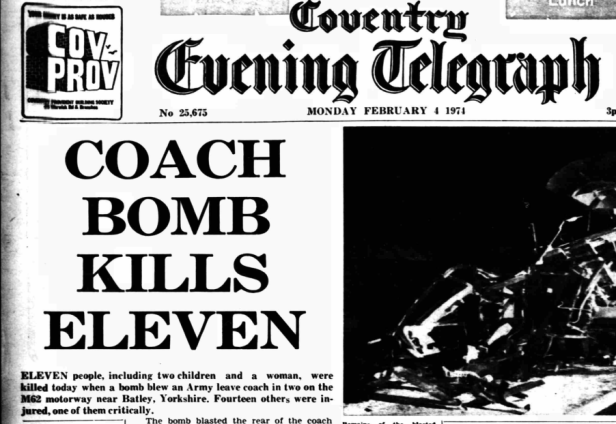 Their body parts were strewn across 250 yards of the motorway.

Relatives of Clifford and Linda later recorded that they had met and begun dating when they were both 15 and working in a mill.

Eight years later they  and their two children were dead.

Another young child not related to the Haughtons was badly burned in the blast.

A man was driving a car 400 yards behind the bus when the bomb exploded.

He drove right into the debris of seats, mangled wreckage and body parts.

Many of the victims did not die immediately.

Because the bombers had been on a bombing spree in previous months in London, police quickly identified them as Irish Guards deserter Kieran McMorrow from Sligo and Marlene Coyle from Derry/Londonderry.

McMorrow and Coyle were the among the first persons ever to have their photographs released to national newspapers in the UK to aid their arrests.

Relatives of McMorrow in Sligo reacted with shock and surprise at his involvement with IRA bombings.

Martin McGuinness and the England Bombings

When Martin McGuinness was admitted to the IRA’s governing Army Council in the early 1970s, he met the IRA’s GHQ Director of Operations, Kevin Mallon who was in charge of all of the IRA’s bombings in England.

Dublin-based Mallon liked to be an IRA hard man fighting from behind the safety of the border with Northern Ireland – he continued in this manner for years, becoming known for the helicopter escape from Mountjoy Prison and a later escape from Portlaoise Prison.

Much later he was accused of involvement in the theft of the race horse Shergar.

Apart from the Tyrone area and largely limited to the McKearney family’s IRA members, Mallon had little direct knowledge of “operators” from across Northern Ireland, whereas McGuinness had.

McGuinness offered to support the organisation of operations in England by supplying Mallon with disposable volunteers from Derry/Londonderry.

Following the embarrassing arrest in March 1973 of all 10 of the Belfast Brigade Old Bailey bombers – including Gerry Kelly – the IRA wanted to show that it still had some bite and at least one bomber who would not be immediately arrested.

While I was being treated for bomb injuries in Dublin in June 1973, McGuinness introduced me to Kevin Mallon and I was pressed to go alone to London almost immediately and begin a letter bomb and small time-bomb campaign, which I did in the summer of 1973 and again over Christmas/New Year 73/74.

McGuinness supplied Marlene Coyle to Kevin Mallon and she was attached to Kieran McMorrow for a bombing campaign culminating in the M62 coach bomb which, along with soldier casualties, murdered a young mother and her two young children.

For all her IRA bravado at the time, I have often wondered how Marlene Coyle has coped with participating directly in the murders of a young mother and her two children.

After becoming Britain’s Most Wanted bomber, Marlene settled quietly – and openly – in Buncrana in County Donegal, 14 miles from Derry and untroubled by any risk of arrest.

McGuiness supplied Marion Coyle (Marlene’s first cousin) to Mallon and after she declined to participate in England bombings she was attached initially to Mallon, but blotted her copy book with him when he was arrested at a dance in Portlaoise after she refused his shouted order to shoot and kill an arresting detective. [She had been carrying Mallon’s gun.]

Acquitted of charges related to Mallon’s arrest, she was later attached to Eddie Gallagher who involved her in the kidnapping of Dutch industrialist Tiede Herrema in October 1975 for which she was captured after a siege in Monasterevin, County Kildare and sentenced to 15 years of imprisonment.

McGuinness later supplied Martina Anderson for the England bombing campaign in the early 1980s and she was arrested after a few years in Glagow with her entire bomb team and sentenced to life imprisonment.

For an article on Martina’s bombing campaign, see here.

One of the issues surrounding leadership of a terrorist paramilitary organisation over three decades is the mounting death toll – Martin McGuinness, Kevin Mallon, Gerry Adams and others oversaw, directed and participated in approx. 1,700 murders, making them Ireland’s most prolific serial killers.

Murders of children, women and men were all validated by the IRA’s claim to be advancing a ‘united Ireland by force of arms’ and IRA leaders were largely unmolested by governments of the Republic of Ireland.

Newspapers at the time openly described the various IRA leaders’ duties and responsibilities for directing terrorism:

Irish Labour Party leader Brendan Corish, commenting on the Republic of Ireland’s failure to extradite any terrorist murderers to Britain, summed up the IRA’s ‘one island’ hypocrisy:

In fact, it turned out that the Republic of Ireland was indeed a safe sanctuary for the IRA’s leadership even as it increased its human rights’ atrocities and kill numbers to over 1,700 victims, with tens of thousands maimed and injured.

As for Martin McGuinness, he was little troubled by his protégé Marlene Coyle’s success in bombing the M62 coach for the loss of a young mother and her two children. In fact, he was elated by the number of young soldiers eliminated.

Martin was not at all troubled any by the 120 women, girls and female infants murdered by the IRA in the course of its useless campaign.

On April 24 1973, when Martin McGuinness’ girlfriend, Bernadette Canning, was arrested traveling in a car containing bomb-making material – three electric detonators, three clocks and two batteries – her male co-defendants suddenly claimed at court proceedings that she and her friend AnnMarie Healy knew nothing about the bomb-making material. Wow! 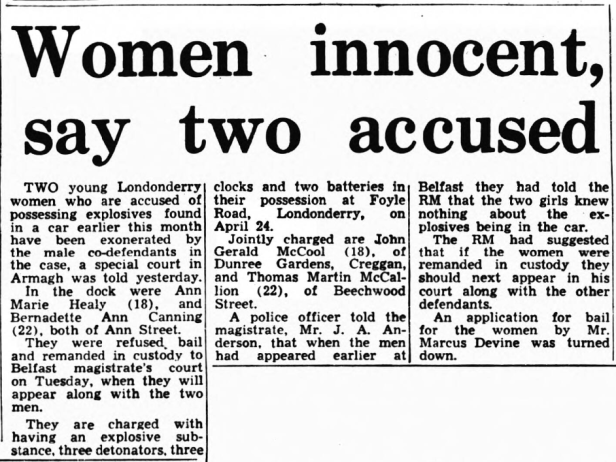 These claims later secured the release of Bernadette Canning whom McGuinness married in November of the following year.

Leading republicans in Derry/Londonderry still claim that McGuinness became a British “agent of influence” at this time.

How could such a mass murderer and liar as Martin McGuinness be granted state funeral honours by Catholic church leaders Archbishop Eamon Martin and Bishop Donal McKeown – Martin, who up to his death ignored his victims, blanked their phone calls and letters and refused to give them the restitution of truth?

Martin who made it known he was not in any way repentant of his IRA career of mass murder?

There are persons in Northern Ireland who are shamelessly peddling the lie that a so-called ‘Truth Commission’ will wring from a gang of mass murdering IRA liars admissions of their human rights’ atrocities.

Not only will that never happen, the great majority of the IRA’s activists are dead and gone or living out lives of disinterest in victims.

Yesteryears’ Coyles and McMorrows and those who directed them are truly disappeared if not protected by secret deals of immunity from prosecution in both Ireland and the UK.

Kevin Mallon, now 80 years of age and still healthy, is living out his years in a luxury home on Howth Hill in County Dublin, untroubled in his conscience about the bombing campaign he directed in England for many years.

He still travels around the country with his racing greyhounds, receiving homage from local republicans.

He never faced any inquiry, arrest or interrogation about directing terrorism in both Ireland and the UK.

“The Sun” newspaper confronted Mallon as he left a bookmakers’ shop in Howth in February 2018 – see here.

Mallon is the heavy-set guy in the red shirt in the video.

There was never any chance that IRA leaders were going to face charges of directing terrorism either in Ireland or the UK while they were secretly negotiating with British intelligence with a view to a possible ceasefire years in the future.

Martin McGuinness was so excited about the IRA’s England bombings that he traveled to London to inspect operations in 1973. He arrived from Scotland wearing a ridiculously noticeable Scots bonnet and greatly enjoyed being in the British capital. He had entered Britain via Scotland on a friendly fishing boat.

IRA GHQ Quartermaster, Brian Keenan from Belfast – who had overseen the kidnapping and murder of his former employer in Grundig, Thomas Niedermayer, in December 1973 was so impressed by stories of McGuinness’ secret trips to his bombers in London that he too took it upon himself to visit a bomb team in London as well.

Admirer and friend of Colonel Gadaffi from whom he was receiving money, weapons and explosives, Keenan left his fingerprints in a London flat used as a bomb factory – a little matter that led to his conviction and 18 year prison sentence in 1980.

Those IRA leaders who swore never to give up until they secured a ‘united Ireland’ by bombing and murdering achieved none of that and ultimately accepted a deal from the hated Brits of immunity from prosecution and entrance into the very institutions they had warred against for decades – Dáil Éireann (the Irish parliament) and Stormont.

What was it all for? The 1,700 murders and many thousands of injuries, the terror and suffering, the thousands of years of imprisonment?

What became of Britain’s Most Wanted Fugitive, Kieran McMorrow?

Kieran fled back to Ireland (via Scotland) with Marlene Coyle shortly after the M62 coach bombing and offered his services for attacks on the border with Northern Ireland.

In March 1977, he was captured by Irish police and soldiers after a shoot-out in possession of a rifle for which he received a 7 year prison sentence.

While newspapers in 1992 wrongly served up stories of his and Coyle’s living in Russia, the truth is that everybody knew that Marlene was living openly in Buncrana and Kieran was back in Sligo.

Not to be outdone, the Sunday World in Dublin ran an even more ridiculous story that they were living in the Australian outback…

The same McMorrow who had deserted the Irish Guards’ regiment when the thrills diminished in turn deserted the IRA when his star dimmed.

How did he manage to live with his conscience? Answers on a postcard…

For an article about the bravest Catholic bishop who directly confronted Martin McGuinness and the IRA Army Council, see here.

If you might be interested in furthering a film/documentary project of mine about repentance for terrorists – see here: