There are a number of outstanding lies in the Sinn Féin/IRA ‘narrative’ about everyone’s “right” to proudly commemorate their war dead.

Sinn Féin/IRA still deliberately prevent the Nairac family – English catholics – even having a fallen soldier’s remains to bury or to have a Christian burial service for or to have a grave or burial plot to visit.

Sinn Féin/IRA remain the only political/paramilitary organisation in Europe to unashamedly and brazenly withhold the remains of a fallen soldier. Clearly, it is not everyone’s “right” to be able to proudly commemorate their war dead – or else the Nairac family would be able to exercise that right. 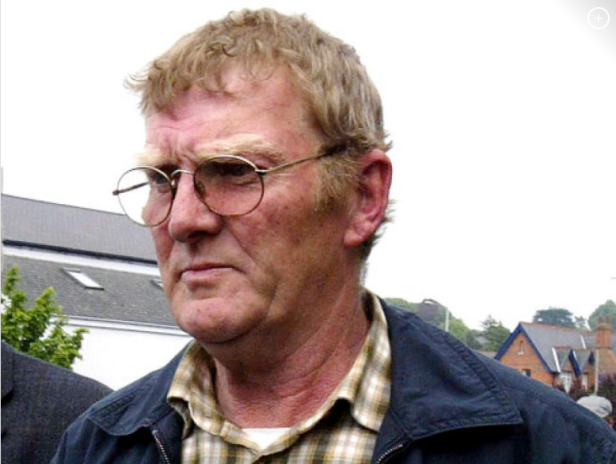 Kevin Crilly aka Declan Parr, Witness to the abduction of Captain Robert Nairac and who admitted driving one of the IRA killers to the field where Nairac was shot in the head [here]

Imagine if the British had ‘disappeared’ the corpses of English prison hunger strikers Michael Gaughan and Frank Stagg – what would have been the republican – and Catholic church and nationalist community – responses to such a grossly uncivilised action? Imagine the cadres of one-eyed republican lawyers salivating to get on this ‘disappeared’ gravy train…

The IRA attack on the Enniskillen Remembrance ceremony and murders of civilians there – a crime against humanity – along with the associated short-lived attempt to lie about the triggering of said bomb [“the Brits triggered it with an electronic ‘sweep’ device”] show that the IRA and cheerleading Sinn Féin apologists have no moral high ground from which to pontificate on the subject of people having a “right” to commemorate their war dead.

Above all, the IRA’s ‘disappearance’ of murdered, or of tortured and then murdered, persons for up to 30 years or more shows that leading republicans – with dual IRA/Sinn Féin memberships and whose names are very well known – have never had any real respect at all for the dead, for their burials, for their graves or commemorations.

Conor Murphy MP should resign from his seat – if not from Sinn Féin itself – because he has been caught out lying most deliberately about a number of dead at the hands of the IRA.

Speaking in a very authoritative manner, Murphy publicly declared that the IRA was NOT RESPONSIBLE in any way for the murder and disappearance of Gerard Evans [and also of the murder of Paul Quinn]. If the body politic is to have any working relationship based on honesty, truth and integrity with Sinn Féin it is ESSENTIAL that a prominent elected Sinn Féin Member of Parliament should tell the absolute truth about such important matters.

What happened? Journalist Suzanne Breen, then with The Sunday Tribune, got a call from an ashamed South Armagh IRA volunteer totally contradicting Murphy (and Adams) and declaring that the IRA did indeed murder and disappear not only Evans – and he pinpointed where the unfortunate Evans was murdered and disappeared into a bog grave and caused his remains to be located – but also beat the equally unfortunate Paul Quinn to death.

Was there any ashamed repentance on the part of Liar Murphy or Liar Adams when they were totally and accurately contradicted by an IRA volunteer and shown up to be blatant LIARS? Not a bit – business and lies as usual.

Murphy – you have NO SHAME – you have NO INTEGRITY. You bring discredit on yourself and on your party and even more on your ideal.

Unfortunately, therefore, it is impossible to believe anything the IRA or Sinn Féin say with regard to the remaining disappeared. They definitely speak with forked tongues and that is unfortunate for future dealings with them – who can trust them if they’re repeatedly caught out lying?

Moving on to the Sinn Féin cheerleaders for past murders and bombings – and some of these are way more extreme than many former IRA bombers or shooters – let us take as a representative example of all of their commemorations the perennial worshipping of The Gibraltar Three shot down by the SAS on the streets of Gibraltar on March 6th, 1988.

‘Rights’ based perspectives’ are commonly in the mouths of Sinn Féin spokespersons these days, so a Human Rights’ perspective will inform the following discussion.

According to an IRA statement on March 7th, 1988, The Gibraltar Three were “on active service” in Gibraltar and “had access to and control over 140lbs of SEMTEX” high explosive.

When the car containing the explosives was later located, the 140lbs of SEMTEX were surrounded by 200 rounds of ammunition along with four detonators and two electronic timers.

The following facts are indisputable but are rarely recounted by the propaganda wings of the IRA and Sinn Féin:

No civilised person with any concern for human life and Human Rights could possibly have wished such an atrocious bomb attack to have succeeded with possibly scores if not hundreds killed and injured.

The IRA had previously shown a capacity to massacre civilians with both no-warning car bombs, inadequate-warning car bombs and other bombs – the list of massacres (usually not admitted by the IRA when they went wrong) are well known and remembered – the Bloody Friday bombings, the Claudy bombings, La Mon, the Birmingham pub bombings, Warrington, Coleraine, the Enniskillen Remembrance Day bombing – and the Regent’s Park and Hyde Park double-bombing – although the IRA would regard the last two ‘jobs’ as ‘successes’.

What civilised person with regard for Human Rights could seriously have wished the no-warning Gibraltar bombing to have succeeded?

Well, in fact, probably all of the Sinn Féin cheerleaders for anti-Human Rights’ atrocities by the IRA would have wished the bombing to have succeeded.

It’s very hard to believe that a former Mayor of Belfast would still ‘proudly’ commemorate and celebrate annually the memory of the would-be bombers of Gibraltar who would have produced a Human Rights’ catastrophe – and that the said Mayor would be the recipient of awards from dumb and dumber Americans of Italian Catholic or Irish Catholic origins who still think Darby O’Gill, the Little People and Leprechauns are abroad nights in Irish fields as they pay their $5,000 a plate to sit alongside Gerry Adams or whomsoever the Army Council has sent over on money-raising expeditions.

It’s very hard to believe that younger women would want to likewise commemorate would-be mass murderers, women who have children of their own and understand motherhood but we have them – Mary Lou McDonald and Michelle O’Neill who see no problem with commemorating, celebrating and worshipping at the tombs of bombers who had not a single iota of respect for civilians lives or civilian Human Rights, but that’s where we are at.

In a braver time with different leaders who might know integrity, future Sinn Féin leaders will call a halt to the commemorations of murderers, bombers and torturers and get on with the urgent business of sharing good government on this island for the good of all its people, but Sinn Féin/IRA haven’t developed that integrity or those leaders.

Catholic church leaders in Northern Ireland have neither the integrity nor the balls to cease involvement in Masses for the commemorations of IRA bombers and murderers.

And of course, that old Father of Lies himself, the Bogeyman of Yesteryear’s Horrors, Gerry Adams, haunts our national and international discourse with banshee hymns to the ‘legitimacy of political violence’ – he who has escaped trial and imprisonment for his particular brand of support for crimes against humanity.

This was and remains the real backdrop to the false dawn of the unrealistic chuckle years of McGuinness and Paisley that were always doomed to get us precisely to where we are now.

[Gerry, could you or Mary Lou or Michelle repeat this article back to me in Irish anytime in the next five years? And can I have fries with that?]

For the IRA’s failure to repent (in any fashion) its many hundreds of murders, see here.